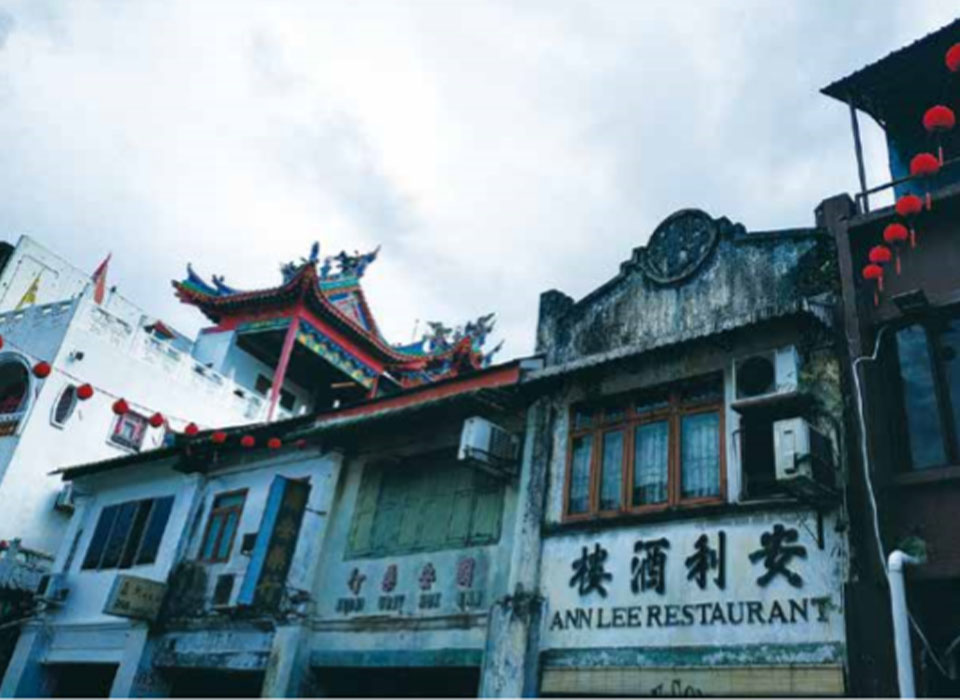 EATING OUT AND COOKSHOPS by Charlotte Hunter

A BRIEF HISTORY OF RESTAURANTS IN ENGLAND AND SARAWAK

CONSUMING FOOD IN PUBLIC THAT is ready to eat, often hot, and always prepared by another, has a long and varied history in the west. Inevitably, some of the earliest eating places were born of necessity, with the roadside tavern being one such example. As early as the third century BCE, Tres Tabernae was purposefully positioned for the traveler, situated at the convergence of three major roads fifty kilometres beyond Rome. Then there were the cookshops – collections of stalls selling bread, cheese, and cooked meat – operating in urban hubs throughout Ancient Greece and the Roman Empire. Some excavations have revealed the existence of rooms behind the stalls, supposedly to function as dining rooms, and thus forming another type of eatery where meals could be eaten in situ. These cookshops owed their existence to another need – to serve the urban poor who lacked the kitchens necessary to prepare meals at home. 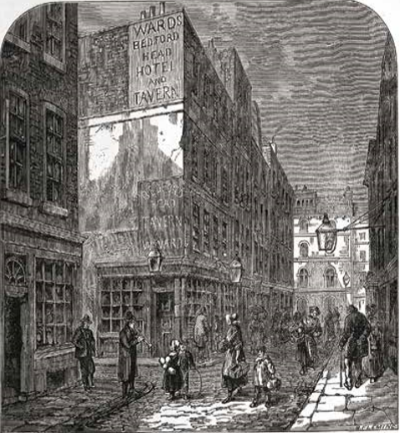 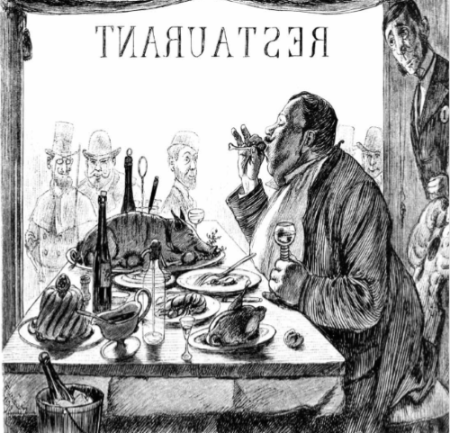 This engraving depicts one of the first ‘proper’ restaurants in England catering to the privileged. 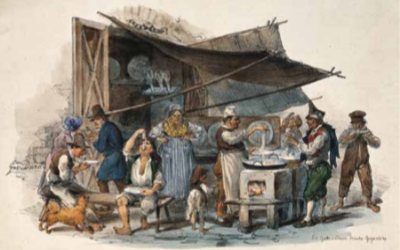 Selling food, under an awning, to customers and travellers in Italy

Much like their predecessors in the Greco-Roman world, medieval and early modern England had its own versions of the tavern and the cookshop. A twelfth-century monk recorded ‘a great public place of cookery’ by the river Thames in London which contained a designated room for dining, similar to the cookshops of old. The term ‘tavern’ soon came to describe eating houses both on the road and in town, with the most famous in Tudor London being The Mermaid, and The Boar’s Head. Most tables were communal, and the food they served simple and inexpensive, limited to a basic fare of bread, meat, cheese, and pie. These establishments and their variations (‘ordinaries’ in the sixteenth century, ‘chop houses’ in the seventeenth and eighteenth) lasted well into the nineteenth century, and like their ancient counterparts, catered primarily to the hearthless sector of society. Those with the means to roast their own meat and bake their own bread continued to enjoy the luxury of eating privately at home.

Meanwhile, as eighteenth-century England ate its pies, over in France seismic changes were afoot. There emerged a surplus of private chefs after the summary execution of the nobility – the chefs’ employers – during La Terreur. Obliged to forge a new path, many chose to cross the Atlantic, carrying their skills to the new world. Others, however, remained and ventured into a new style of eating place designed to feed the new middle class, with the first ‘official’ restaurant considered to be Paris’ Grande Taverne de Londres. Rather than simply addressing the necessity of eating, it and other new establishments gave consideration to décor and introduced formal place settings and menus. The food they served was rich and delicate, consisting of such dishes as veal chops grilled in buttered paper, and sauces made with cheese, truffle and cream. 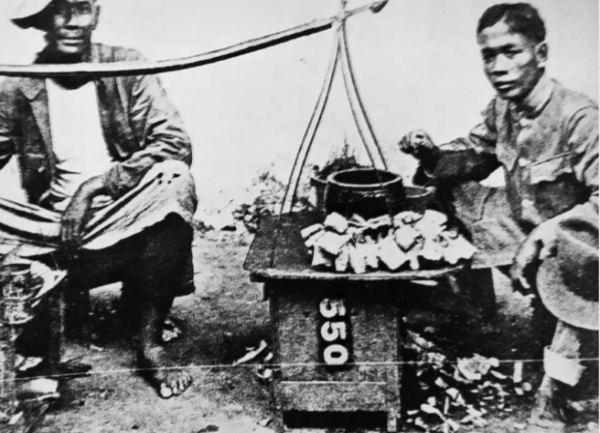 It took until the mid-nineteenth-to early-twentieth-century for a similar dining culture to gain traction in England. It emerged in the restaurants associated with the new hotels, with perhaps the most well known in London being The Ritz. As in France, the concept of ‘going out’ for a meal for the sake of pleasure developed, and service and décor played a crucial role in the experience. Another French influence was the food they served, which was unabashedly Gallic in flavour, with such dishes on the menu as duck a l’orange, and steak with foie gras. Dining out became an event, with patrons expected to dress well and behave well.

The Aurora Hotel around the mid-fifties

In the meantime, different food culture was beginning to emerge in Sarawak. While in the scattered Malay kampungs it is almost a given that cooked food was bought and sold, it was within the denser Chinese communities that the culture of street food grew commercially. Early stalls in Sarawak sold what was essentially the one-bowl-meal, typically rice-based with a scant helping of meat, before developing into the popular dishes we enjoy today. By the mid-twentieth century, a number of Malay sellers were operating alongside the Chinese, with satay being especially popular. Over time, clusters of makeshift stalls became permanent and developed into the hawker centres we have now, with many becoming the heart of their communities.

Alongside the presence of the Chinese, Malay, and indigenous peoples in Sarawak were of course the British. By the late-nineteenth century, around fifty years after their arrival, The Sarawak Club was formed as a private institution for the officers of the second Rajah. If the colonists in contemporary India were anything to go by, they likely requested food as close to home as could be mustered, along the lines of meat joints, potato in all its forms, stew, bread, and pie. While a small number of British cooks were present among the personnel, a larger number of Chinese were employed both at the club and within the houses of the British. As a result, the western staples of toast and coffee (with the option of tinned evaporated milk) soon became part of the Chinese repertoire.

After the Japanese occupation, Sarawak in the mid-twentieth century witnessed an economic upturn, resulting in the development of its first Chinese restaurants. Meat became the central feature of a meal, rather than the cheaper carbohydrate-based dishes found streetside. One of the most popular restaurants in Kuching was Ann Lee, with some of their signature dishes being Hainanese pork and chicken chops. As in the west, these restaurants became special occasion places, popular for wedding receptions and Chinese New Year dinners, unlike food court dining, which existed as part of the everyday. Additionally, the commercial availability of Malay food increased at this time, and was well received among a new generation of British government workers.

Ann Lee is one of the first Chinese restaurants in Kuching (still on Carpenter street) popular for their wedding receptions and dinners.

The mid-fifties’ introduction of a western restaurant for the public (as opposed to the members-only Sarawak Club) may be considered a turning point in Sarawak’s dining history. Much like the early high-end restaurants in England, it came attached to the newest hotel, The Aurora, in Kuching. It catered to the elite, serving sizzling steak, French fries, and garden peas, with side plates of bread rolls and butter. Unsurprisingly, it proved inaccessible to the majority of Kuchingites, much as The Ritz in London was and is to the majority of Londoners. A key part of its significance may have lain in its function as a political statement – to promote Kuching as a modern, forward-looking city within the British Empire.

In recent years, diversification in the restaurant trade has been driven by demand. While Chinese and Indian restaurants have flourished in England since the mid-twentieth century (fuelled largely by post-war immigration), in London it is now possible to find every type of ‘exotic’ eatery under the sun alongside more traditional provision, which remains as popular as ever. Dining out in Sarawak (Kuching in particular) has also seen variation in the past few decades, with the emerging market for indigenous food worthy of particular note. While American cafes and fast food chains have reached their tentacles into every city on the globe, it is reassuring to know that curiosity for the new, the different, and indeed the old shows little sign of abating.

Charlotte Hunter descends from a shophouse family in old Kuching. Dividing her time between Sarawak and the UK, she can often be found staring into space at Lau Ya Keng food court on Carpenter St. Feel free to buy her more coffee. 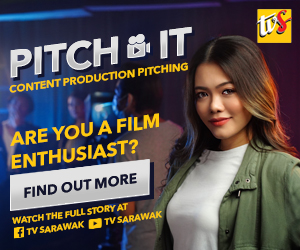 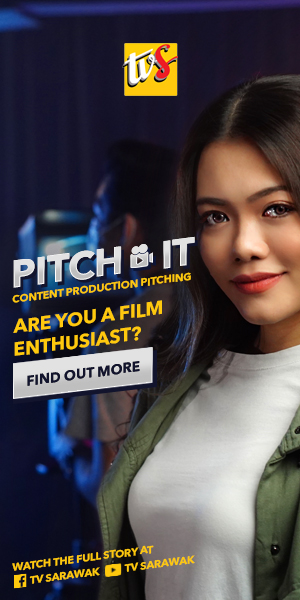