HUNTING FOR FOOD by Maclean Patrick

FROM SARAWAK TO ENGLAND AND BACK

THERE IS A STREAK OF green, across the hills west of the river. Younger trees among a forest of old and ancient foliage; the one that his father saw as a young boy and his father before him. Granite boulders rimmed the forest to the east, leading further inland untill they touched the base of the mountain.

No-one ventured that far in, not the elders nor the best of the hunters from his longhouse. It was sacred land, forbidden. A land kept pristine and pure. But the west was game area where all the best hunters ply their skills.

There was a mental map that Meral had drawn, from the countless conversations with the older hunters and especially those he had with his late father. A map of ripe hunting where the deer and wild boar were plentiful, and where the fish swam without fear of the crocodile.

“When possible, stay on the highground and shoot downwards.”

“Avoid going past the old Belian tree at the bend near the rubber trees. That path leads to the burial grounds.”

“A quick kill is better than having to deal with a wounded animal, especially wild boar,” he was warned. “Kill it quick or else learn to climb a tree as quickly as you can.”

Injured wild boar have charged many a wishful hunter, and there were plenty of his longhouse folks who could attest to it. Yet, a wild boar was the ultimate prize.

In his youth, Meral had brought home squirrels and wild birds. Those were easy for his rubber catapult and sticky glue traps. Yet, bringing home a wild boar was a joyous occasion for the village. He spent many evenings over the makeshift bonfire in the clearing in front of the longhouse, where the hunters would recount the story of the hunt and share their bounty. The weapon of choice for these hunters was the blowpipe. A seven-foot-long hollow staff with a spear tip at the one end.

A rock steady hand on the blowpipe, the draw of breath, the tightness in your chest, and you count your heartbeat as you focus and release a burst of air to send a poison dart forward. A well-placed poison dart would paralyze a boar and a quick stab with the spear point to the throat would ensure a quick death.

There was always enough wild meat to go around for everyone, equal portions of meat for all with double portions to the hunter’s family.

Nothing went to waste.

Wild boar tusks would be made into a necklace, ear lobe pieces or bracelet and provided the hunter with invulnerability. The skins of monkeys and mousedeer or the skin of a monitor lizard were used for the katebong drums, to aid their prayers to the gods.

The skull of the mighty hornbill would adorn a warrior’s headgear, strong and majestic and beautiful. And he wore the hornbill’s feathers on his baju burung, for he was a son of the great Aki Lang Sengalang Burong, the Iban God of War.

The blowpipe is a hunting tool for live food such as wild boars and squirrels.

Ketebong drums were made of hunted animal skin

“Never cut down more than you need, for you never know if it is a spirit’s home.” He had heard the stories. “Ask for permission to pass if you enter the area. And if you meet old man along the path, give him way and don’t say a word.”

At 16 years of age, his father had allowed him to tag along with the hunters, shouldering their packed food and keeping their tobacco and one time they even let him set the fire during an overnight hunt.

“Don’t mistreat your hunting dogs. They are your best friend,” he had learnt. “Do not kill without reason. We are responsible for bringing back food for the longhouse.”

He had married late in his 30s, much to the disdain of his mother. She had hoped he would find a bride before the passing of his father. But life and love at times do not meet nor match.

Selling rubber had given his young family enough to get by, but that was not enough. He eventually found work with the local Chinese contractor, furnishing funeral plots for rich timber tycoons or well-to-do merchants. The money was enough for him to send his two sons to school, but he yearned for simpler times. He yearned for the open hunt, the chase and the victory of bringing home the bacon, literally.

“Hunting is in our blood.” His father had told him, “With the forest, we are content. The forest has always given all that we need. If we need vegetables, we can always pick the midin or paku. If we need meat, we hunt deer or wild boar.”

Being the only son afforded some luxuries to Meral, the greatest one being that he had inherited his late father’s shotgun and the permit to buy ammunition. And as the elders passed on to the everlasting hunting grounds, Meral found himself in a position of privilege. He could lead the hunts by his longhouse.

“Will you take our son with you?” His wife had asked. “The school holidays are coming up and they will need something to occupy their time.”

There is a streak of green, across the hills west of the river. Younger trees among a forest of old and ancient foliage; the one that his father saw as a young boy and his father before him. Granite boulders rimmed the forest to the east, leading further inland untill they touched the base of the mountain. It was here that Meral and his son walked.

The boy had shouldered their supply of food but Meral kept the cigarettes for himself.

He had a pack of hunting dogs with him, 6 strong. The dogs were playful and ran about carefree, for it had been a while since they headed into the jungle to hunt.

At daybreak, Meral led his party out towards the river. It was fruiting season and the wild boars could be found along the river where fruittrees were plentiful.

As they rounded a bend and with the sound of running water near, something in the brush had excited his hunting dogs.

“The dogs will give chase,” He told his son. “Keep up with me or you will be lost to the jungle. I will not have the time to search for you, so you best stay as close as possible.”

And by evening, Meral was sitting by a fire as his son recounted the tale of how he had hunted and killed a wild boar though he was careful not to tell about how fast it took them to climb a tree. For Meral had hit the wild boar’s thick hide only to realise he had loaded his gun with the wrong type of round. And from the branches of a tree, with his son still very near, he had managed to load the correct type of round and shot the boar dead between the eyes.

“If ever I stop hunting, there are always rubber and palm-oil trees.” He consoled himself, as he reached for his necklace and kissed the wild boar….

“DO NOT KILL WITHOUT REASON. WE ARE RESPONSIBLE FOR BRINGING BACK FOOD FOR THE LONGHOUSE.”

Hunting for the wild boar had its dangers, but it was a hunter’s ultimate prize.

Maclean Patrick has published two books, written political commentaries and is active in the activities of the Wordsmiths of Kuching, a Sarawak based poet’s community and SaraLawak, a Kuching based comedy group. Experienced in theatre, spoken word performances and stand-up comedy shows, he was in the Petronas short web-film – Baju Burung Apai released in May of 2019.
KINO 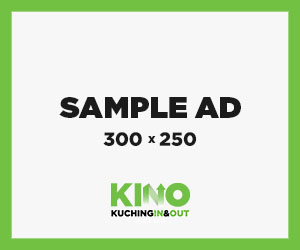